An Olympic Journey to Rio for a Rodon Family Member

“If you want to achieve your dreams you have to believe in yourself and work hard every day to achieve them. If it were easy, everyone would do it”, Matt Baranoski, Olympic Cyclist

Recently I had the honor of interviewing Matt Baranoski, a world class cyclist named to the U.S. Olympic track cycling team in March and the son of Mike Baranoski, a Design Engineer at The Rodon Group. With the Summer Games in Rio coming up in just a few months, I’m grateful that Matt was able to take some time out of his busy schedule to speak to me. You can read our conversation below. 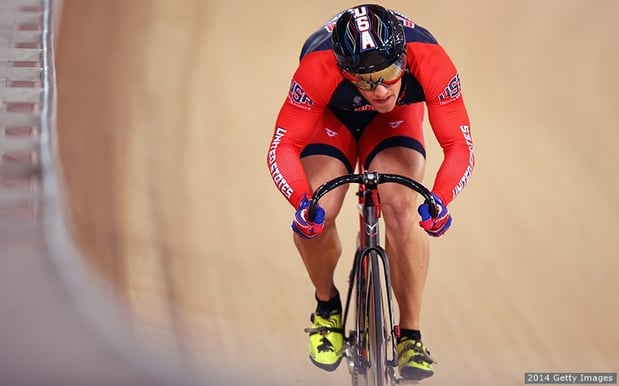 How and when did you get started in cycling?

My older brother wasn’t interested in baseball or football, so on a whim, my parents decided to give track cycling a try. We raced around the velodrome cycling track in Trexlertown, PA where they had free classes. I’ve been racing there ever since and the now “Valley Preferred Cycling Center” is my home away from home. I got my start on the track at 6 and at 12 I competed in my first national race and becoming the Junior National Champion. At that point, I decided to focus on cycling. I still train there and have the opportunity to meet with the younger cyclists while I’m there.

Can you explain the different types of race events and what they entail?

I won my first world medal in Italy in 2011 competing in a race called the Keiran at the age of 17. Keirin bicycle racing, a Japanese sporting invention, was introduced to the Olympics during the Sydney, Australia games in 2000. Unlike other sprint races which have two competitors, the Keirin can have from 6 to 9 competitors in the race. A pace vehicle called a derny starts the race with all of the competitors jockeying behind. After picking up speed and six laps later, the derny pulls off the track allowing the cyclists an opportunity to sprint to the finish. The bikes have no brakes and only one gear. There is really no stopping on a dime. With so many riders on the track at one time, crashes are a frequent occurrence. My fastest speed is just less than 50 MPH, and pretty much everything happens in less than one minute. That’s the actual serious race time, within that one minute.

You have a very close relationship with your dad, especially since he’s also your coach. How has he influenced you over the years?

Over the years, we’ve learned together how to do all of this. It’s been really cool, the way he’s been there for me since the beginning and we’ve had a lot of time to spend together. It’s not typical at all to have a parent coach you for track racing. He’s given me a lot of support and was able to take the time out to coach me while juggling work and family. I have a strength coach as well and for the Olympics, the national team coach will take over.

You have the word “Believe” on your handlebars. What motivates during a race and off the track?

“Believe” was something my mom originally thought of. The mentality is about being there to win, not to do anything else. This is harder than an endurance race since you’re head to head with someone. You just have to focus on yourself and believe you can do it.

Tell me a little about your bike.

I have more than one bike, and I get a brand new bike for Olympics. I’ll have two identical bikes and then a road bike to go back and forth in the village at Olympics. I’ve had great sponsors who have stayed with me over the years. Felt, which is a bike company, has provided me with some great bikes and has been a long-term sponsor. Oakley is another one who has been with me a while. K’NEX has been a sponsor in the past as well.

What does a typical day look like for you?

I typically train for 3 hours in the morning and then again for 3 hours in the afternoon, including bike and strength training, 7 days a week. When you have downtime, the recovery period is long. It’s not free time. What’s sometimes hard for people to understand is the amount of time and energy it takes to recover from training. I can only sleep or rest in between and get ready for next workout. I do have an occasional rest day, but I really have to be an athlete a 100% of the time. You can’t take time off for it. You have to plan everything you do and know that everything you do revolves around training. My diet consists of 5500 calories a day, about double what the normally recommended calorie intake is. I get weighed every morning.

What happened when you heard you had been named to the USA Olympic track cycling team?

I was named to the team in March. It was a two-year process to qualify for the Olympics, so I have kind of known for a while. I got the new when I was in New Zealand for the World Cups.

Who is your biggest competitor at the games and how many people will you race against in the event?

The countries that are big for track cycling are Great Britain, France, Germany, Australia and New Zealand. The USA is really an underdog. It’s an incredible opportunity to be a part of it, but I don’t have big expectations. Anything can happen. Some of our team has been to other Olympics in the past, but for most of us, this is the first time. It really helps to have others that have seen it and gone through it before. I’ll race on August 16 and then will be home for just two days before I head back to Penn State.

What’s next for you after the games- continue training, racing or a career in electrical engineering?

I’ll be graduating in December with an Electrical Engineering degree from Penn State Honors College. I was able to get a two-year leave of absence to train for games, which is really unheard of. I’m young enough to be considered for 2020 Olympics, so we’ll see.

You’ve traveled a lot of the several years. What has been your favorite city and why?

I think my favorite place was New Zealand. We were in Cambridge, New Zealand for a month for the World Cups. The country reminds me a lot of where I grew up in Bucks County, with rolling hills and dairy farms. While I was there, I was able to see the movie set of The Hobbit, which was really cool. The Netherlands is probably my second choice. USA Cycling has a house there. Both of these are places I would love to go back to for vacation.

What would you tell young kids who look up to you and want to become professional cyclists?

I have two pieces of advice…one is to be very patient, as it takes a really long time! There will always be new learning curves. Keep working hard and take your time, even if you want to be there right away, believe in the process.

The second piece of advice is that there is no secret to it all, no special training or method, just hard work, making the necessary sacrifices and doing all of the little things right. It’s all worth it in the end.

The entire Rodon family is incredibly proud of Matt and admires his hard work, dedication, and determination. We wish him the best of luck at the Olympics and know he will continue to accomplish great things. You can follow Matt on his blog https://mattbaranoski.wordpress.com/ or on Twitter @MattBaranoski