School groups grades 6 through 12 are challenged to build the most innovative and thrilling amusement park ride model using only K’NEX pieces. A select group of K’NEX designers and Cedar Point ride engineers and officials will choose five winners to exhibit their creations at Cedar Point during Math & Science Week and remain on display throughout the park’s 2012 operating season. Additional prizes include K’NEX building sets, online store credit codes, and Cedar Point tickets. 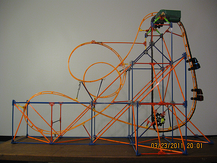 In its inaugural year, the contest generated submissions from across the nation including California and New Jersey. The five winning schools represented three different states: Ohio, Pennsylvania and New Jersey. Courtney Washington, the teacher of the winning classroom from Glenfield Middle School in Montclair, N.J., traveled more than 500 miles to see her students’ work on display. Washington even received a letter of recognition from President Barack Obama honoring the work she has done with her class.

“We were thrilled to be selected as one of the winners and the students had an awesome learning experience. They were actively engaged and highly dedicated to their project,” said Washington. “There was an abundance of teachable moments throughout the entire project. They were able to apply engineering, physics, social studies and language arts to mathematics.”

To be eligible, students must consider mathematical and scientific applications such as potential and kinetic energy, speed, acceleration and gravity. The project is intended to encourage students to apply their knowledge of math and science in a fun and innovative way.

“We were extremely impressed by the quality of rides submitted by the school groups last year,” said Rob Decker, corporate vice president of planning and design at Cedar Point. “We look forward to seeing the unique and inspiring projects submitted for this year’s contest.”

To enter, school groups must submit a 500-600 word description as well as a video and photos of the ride. Entries will be evaluated on creativity, uniqueness, detail and accuracy of the ride description. Class or student groups can register by visiting the K’NEX website.

“Last year’s Great Thrill Ride Build-off was extremely successful. Students were able to mesh their creative skills with the principles of math and science,” said K’NEX President and CEO Michael Araten. “We are excited to partner with Cedar Point again to provide a challenging and fun learning experience to students around the country.”