K’NEX Brands, the only U.S. construction toy company focused on Building Worlds Kids Love™, has chosen the winners of its 2012 K’NEXpert Search. The nationwide search asks kids ages 5-12 to submit original designs made entirely out of K’NEX pieces. This year, for the first time, three creative kids were awarded $20,000 savings bonds for college in celebration of the upcoming K’NEX 20th anniversary in 2012.

The three Grand Prize winners and seven finalists were chosen from three age categories.  As Grand Prize winners, Andy from Waterloo, ON, Canada (5-6 year-old age group); Andrew from Glenmoore, PA (7-8 year-old age group) and Josef from Plano, TX (9-12 year-old age group) will each be awarded a $20,000 Series EE U.S. Savings Bond to be used for their education. The seven finalists, who will each be awarded $1,000 Series EE Savings Bonds, are: Jessica, age 5, from Plano, TX; Reilly, age 6, from Slidell, LA; Rachael, age 8, from Garland, TX; Alex, age 8, from Waterloo, ON, Canada; Judd, age 11, from Ottawa, ON, Canada; Melissa, age 10, from Plano, TX; and Evan, age 12, from Huxley, IA.

“The K’NEXpert contest is the highlight of our year,” said Araten. “K’NEX fans consistently surpass our expectations with their creativity and innovation, building elaborate works of art that wow even our toy designers. We’re proud to have the current winners represent K’NEX during our 20th anniversary year.” he said. 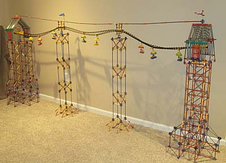 One of those works of art is the Bowser’s Big K’NEX Castle built by 9-year-old Josef. Josef was quite the architect when he designed and built this huge replica of Bowser’s Castle from the Mario Kart video game entirely from K’NEX.

The two other Grand Prize-winning builds are equally impressive. Five-year-old Andy built a replica of biplane which he named Flash the Biplane.  The K’NEXmen pilots look like they might just take off in flight.  Andrew, age 7, created the K’NEX Sky Ride, inspired by real world amusement rides he has ridden. Using more than 2,000 K’NEX pieces, the ride is a K’NEX engineering marvel.

K’NEX is the world’s most innovative construction toy company. As the winner of more than 200 international awards, K’NEX encourages youngsters to “imagine, build and play.” The K’NEXpert Search is an annual contest that asks kids to design an ultra-creative, original model made entirely out of K’NEX parts.

Founded in 1992, K’NEX Brands, the world’s most innovative construction toy company, was established to make and sell what has become one of the world’s leading integrated construction systems for children. Winner of over 200 international awards and recognitions, K’NEX is America’s building toy company focused on Building Worlds Kids Love, and encourages youngsters to “imagine, build and play.”  Since 1992, The Rodon Group, a subsidiary of K'NEX Brands, L.P., has manufactured over 30 billion parts for the K'NEX building toy system. For more information, please visit www.knex.com or www.rodongroup.com.