Matt Baranoski, son of Rodon tool designer Mike Baranoski, is having a winning session at the track, the Velodrome track.  This 2010 Elite National Keirin Champion and Junior World Medalist continued his dominance in the sport on Friday, July 28th at the Valley Preferred Cycling Center with another victory in the highly competitive Keirin Cup.

Keirin bicycle racing, a Japanese sporting invention, was introduced to the Olympics during the Sydney, Australia games in 2000.  Unlike other sprint races which have two competitors, the Keirin can have from 6 to 9 competitors in the race.  A pace vehicle called a derny starts the race with all of the competitors jockeying behind.  After picking up speed and 6 laps later, the derny pulls off the track allowing the cyclists an opportunity to sprint to the finish.  With so many riders on the track at one time, crashes are a frequent occurrence. 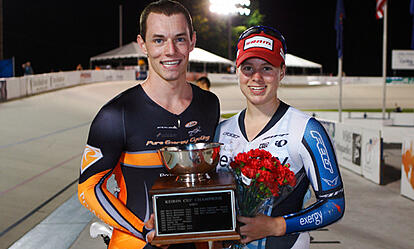 On Friday, Matt Baranoski's nineteenth birthday, he dominated the race by controlling a front of pack position.  "My strategy was what everybody wants to do - to get to the front and stay out of the back". With speed and technique, Matt was able to hold off a challenge from Giddeon Massie, reigning National Keirin Champion.  The evening at the velodrome was made even more exciting when Matt Baranoski not only won the Keirin Final, but the 3 kilometer scratch race as well.  What a great way to spend his birthday! You can watch the thrilling Keirin race here.

When Matt is not racing or training, he studies Electrical Engineering at Penn State University and is on track to graduate early.  His family and the entire K'NEX and Rodon family are very proud of Matt and admire his hard work, dedication and determination.  We know he will continue to accomplish great things.

Links to Matt's blog and his cycling team's website are listed below.