The White House staff worked closely with our team to make sure all details were cared for.  We recruited Rodon volunteers to help manage the attendees and the press.  Others helped clear the event area.  K’NEX employees began setting up displays of construction toys by mid-week and soon it looked less like a manufacturing plant and more like Santa's workshop.

On Thursday morning, the helicopters that would bring the President to our site on Friday did a test landing in an open field next to our plant.  This event brought the industrial park to a standstill with spectators stopping to see the spectacle.  In all five helicopters landed,  3 Chinooks and two Presidential helicopters. 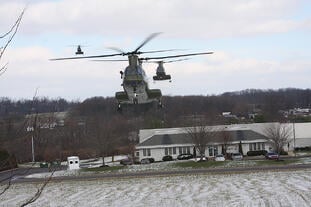 By Thursday afternoon the plant was filled with communications and lighting teams.  Event companies with pipe and drape constructed areas for press and staffers. They worked well into the night to get all the details just right.
Satellite trucks arrived to broadcast the event to all major news organizations throughout the country.

The day of the event, several Rodon Group employees arrived early in the morning to help with a sweep of the plant by secret service agents and dogs trained in explosive detection.  The doors opened at 9:30 and we worked to get all attendees and press situated in time for the event.  The CEO and President of the Rodon Group and K’NEX, Michael Araten was the first to address the crowd.  Then, after a brief plant tour, President Obama arrived at the podium and delivered his remarks on the impending changes in tax code and the need to make decisions prior to the end of 2012.

The Rodon Group was flooded with calls from the press.  The President of our company, Michael Araten, was busy all week with interviews from new crews as close as Lansdale and as far away as Germany.  Apparently, K’NEX construction toys are very popular in that country.  The number of our Facebook fans surged and our website traffic went through the roof.  Considering we are a high-volume plastic injection molding company, we were pretty impressed with all of the activity and attention.

We all know it is a great honor to host a White House event.  And, most of the comments and responses from the public have been very supportive.  However, there have been a few folks who obviously have strong political convictions.  When asked about the fallout from these consumers Michael Araten responded “Because we live in America, I respect your opinion regarding the President.  As an American, when any President from any party calls and asks to visit, the answer should be yes. On a personal note, I voted for President Obama and have voted for Republican presidents, including both George HW and George W Bush in the past.  My belief is that as Americans we need to rise above red states and blue states and focus on being red, white and blue together."

The Rodon Group has been on the forefront promoting American Manufacturing.  We offer a "Cheaper than China" pricing policy and have reshored billions of manufactured parts back to the United States.  We support STEM education and provide apprenticeship programs to select individuals insuring we will have the technical talent needed to grow our business for future generations.

We share a common bond with other manufacturers across the country.   We share their pride in the quality American–made products are known for.  No matter your political philosophy, we are all working towards the same goals – creating great, innovative U.S. products that keep jobs in this country and help preserve the middle class way of life.

“We’re incredibly proud,” said company CEO Michael Araten in a brief interview with Crissa Shoemaker at The Doylestown Intelligencer. “We’re incredibly honored. I think it means the President and his team recognize that manufacturing in the United States is important. That focusing on manufacturing and keeping confidence high, which is what the fiscal cliff is all about, is important. If you can do it with toys, you can do it with anything.”