You can't shut down Manufacturing Day

While our government may have come to a standstill last week on Friday, October 4th, Manufacturing Day at The Rodon Group continued with a few last minute changes.  Absent were our local congressman and delegates from the Commerce Department.  However, we still had a great turnout including educators, workforce development professionals and local business leaders.  Our speakers included our President and CEO Michael Araten, the CEO of Bollman Hats and Founder of American Made Matters, Don Rongione as well as John Grant, Manager of Government Affairs for SPI, The Plastics Industry Trade Association. 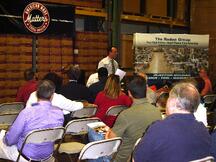 Michael Araten kicked-off the event with his insights into the importance of manufacturing to the American economy.  “A strong economy requires four core elements; energy, defense, food and manufacturing.  When you make your own products, you control your own destiny.  Advanced manufacturing is alive, well and growing here in Pennsylvania and around the country.”  Araten said. “America’s best days are still ahead, advanced manufacturing’s future is bright.  Together we are building a stronger economy, stronger workforce and stronger nation.”

John Grant, Manager of Government Affairs for SPI, The Trade Association of the Plastics Industry, spoke about their sponsorship of the national event.  Grant pointed out “SPI advances a pro-manufacturing agenda.  What better way to do that than by opening the doors of amazing facilities such as this one so that everyone, including policy makers can see manufacturing in America u 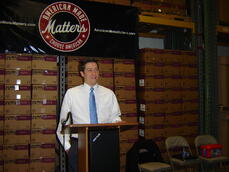 p close.”   He continued “America still makes things.  There is a misperception that we are solely a consumer nation.  We can look around today and know that isn’t the case, and it is events like this that will help the rest of the country realize that truth.”  Grant went on to illustrate the importance of the plastic industry to the American economy with some impressive figures from 2012; the value of goods shipped was over 373 billion dollars, the industry employs over 900,000 workers in close to 16,000 facilities nationwide.  For the first half of 2013, the industry had a positive trade balance of 7.4 billion dollars.  This fact alone was also highlighted by Mr.  Araten who talked about developing export opportunities for K’NEX with China and other foreign countries. 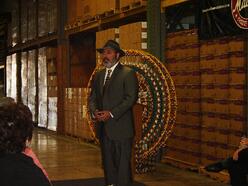 The Rodon Group was also joined by Don Rongione, CEO of Bollman Hats and founder of American Made Matters, a movement born from the desire to promote American manufacturing jobs and products.  Rongione knows too well the pain that cheap foreign labor can inflict on an industry.  In the late 2000’s, his industry was hit by a glut of cheap Chinese products.  His employee-owned company was forced to cut jobs.  In response, Rongione, the son of a former pattern cutter, said never again.  With that, American Made Matters was born on July 4, 2009.  “We’ve grown to 200 members in a variety of industries.  Our members represent 38 states.”  Rongione went on to say “Manufacturing has a more powerful job creating impact than any other industry.  We need to raise awareness of this fact.  So, on November 19th, we are launching American Made Matters Day to encourage consumers to buy at least one American-made product and show their support for American manufacturing.” According to ABC News research, if each of us spent just $64 on American made goods during the holiday shopping, the result would be 200,000 new jobs.

While, the speakers reinforced the importance of American manufacturing, the factory tour gave attendees a chance to see it in action.  Three groups were guided through the facility by company executives, including K’NEX creator and owner, Joel Glickman.  They were shown the design, tooling and manufacturing processes in action and watched Baxter, a new adaptive manufacturing robot from Rethink Robotics at work.

This was the second year in a row The Rodon Group hosted a Manufacturing Day.  It takes a great deal of preparation to ready a manufacturing plant for such an event.  Our facility staff moved bulk boxes and pallets, installed banners and chairs, and laid carpeting to transform the shipping area into a meeting space.   Each attendee received a 400 piece K’NEX building set as a reminder of this special day. 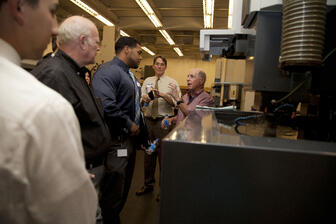 d in 2012 by a group of industry and government organizations to promote American manufacturing careers and American-made products.  Last year, approximately 200 manufacturers participated.  This year the number topped 800.   Their website says it all.  “Supported by a group of industry sponsors and co-producers, MFG DAY is designed to amplify the voice of individual manufacturers and coordinate a collective chorus of manufacturers with common concerns and challenges. The rallying point for a growing mass movement, MFG DAY empowers manufacturers to come together to address their collective challenges so they can help their communities and future generations thrive.”

There is little doubt that our economy cannot thrive without a strong manufacturing sector.  Statistics from the National Association of Manufacturers* prove this point.

The Rodon Group proudly took part in this important national event and plans to do so again next year.  Our future success depends on a strong and growing manufacturing sector.  Manufacturing Day is a great way to show our commitment to creating world class products and world class employment opportunities.

Did you attend a Manufacturing Day event?  Share your experience with us!