Made in the USA Success Story: An Interview with Josh Miller

In 2012, we were visited by Josh Miller, creator and producer of “Made in the USA: The 30 Day Journey”, a documentary film that dives deep into the realm of the current economic uncertainty in the United States. The film focuses on the jobs that have left our country over the last decade and the future of America’s economy. On day 15 of the journey, Josh and his team stopped by The Rodon Group and K'NEX facilities to learn about how we've made our plastic parts in the U.S. since 1956. 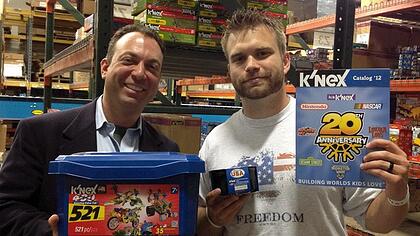 Josh has continued on his journey with the film and has effectively spread his message on social media. Last month, our friends at Cerasis had a chance to sit down with Josh for a Q & A to find out what he's been up to and what his plans are for supporting the continued growth of American manufacturing.

Watch the "Made in the USA: The 30 Day Journey" Trailer

Adam Robinson (AR): Josh, recently your documentary, which we featured on our blog back in 2013, climbed the ranks on Itunes recently on documentaries, what’s your "Made In USA" Journey been like since you released the documentary?

Josh Miller (JM): The journey has had its ups and downs. I don’t do this full-time, so marketing and keeping things going can be difficult at times while balancing a job and family life. I’m currently involved in a feature film that I’m extremely excited about so I’m keeping the dream alive when it comes to the film world. I still do my best to purchase “Made in USA” whenever possible. I’m not quite sure that mainstream America has bought into the concept yet even with all of the hype. Everyone thinks manufacturing is a pastime in American history with the recent tech evolution, but I believe it’s more important than ever to have an advanced manufacturing base in America. I feel I took the safe road with the documentary. In hindsight I feel we should’ve hit hard into the root causes of America’s economic instability that still exists today. I believe the offshoring of the manufacturing sector has created long-term instability in this country and has caused the middle class to shrink significantly. I don’t care what the stock market does, things aren’t going to get better until we’re able to rebuild the American middle class and provide access to working capital for millions of entrepreneurs in America. We’re getting squeezed out of the picture in this global economy and we must work together to fight back.

AR: You are about to embark upon Los Angeles to visit proud Made In USA Zipper Manufacturer, UCan Zippers, what is your goal for the trip and what do you plan on doing?

JM: My first goal is to tell the amazing story of UCAN and how they have continued to survive making zippers in America when so many companies have left our shore. Just speaking with this group on the phone made me excited about getting back into this and creating a great project. I’m very happy our documentary has been able to inspire people to stand up for American manufacturing and I’m excited that they want me to help them tell their story. I feel it’s my duty to speak up for those around our country that want a prosperous future for themselves and their family. I will stand up for the American middle class and our entrepreneurs

AR: The Presidential race for 2016 is heating up and manufacturing output, manufacturing jobs, and the talks of reinvigorating the economy are top of the list, why do you think that is?

JM: The two people at the top of the list that will not likely get my vote are Donald Trump and Bernie Sanders. These are the only two that are talking about the key issue, in my opinion, that will reverse the offshoring trend and be able to repair our unstable economy. That issue is trade. I believe in a global economy in which America leads with a strong, healthy middle class, but we’re getting hammered with one-way trade agreements. Massive entities are essentially offshoring our jobs to countries in which their government care so little about their people and these people are considered “modern-day” slaves in my opinion, we see these undercover videos of the conditions of some of these facilities overseas, I can only shake my head in regards to how disconnected we are and what we’ll ignore to get our $5 t-shirts. It’s saddening. We’re so disconnected from our supply chain, I’m not sure if we’ll ever be able to fix it. You would think after the results of NAFTA people would be rioting in the streets opposing the Trans-Pacific Partnership, but that’s not happening because our country likes to repeat history apparently. Mark my words, the Trans-Pacific Partnership will be the final nail in the coffin of American manufacturing. To my astonishment, the one thing Democrats and Republicans come together on is the one thing at the heart of our economic destruction, the Trans-Pacific Partnership. It just shocks me. How can we support a trade agreement that has to have additional legislation proposed to provide assistance to American workers that have lost their jobs due to “trade pacts”? I’d like to see where that piece of legislation currently is at the moment as well.

AR: How do you plan to put the spotlight on American Manufacturing?

JM: I’m going to let my videos do the talking, but I will say that I’m going to start focusing more on leadership and entrepreneurship in this country to get us on the right track. I’m also going to start breaking down this movement into regions of the country to show what different parts of the country are doing well. I’ve got plan and we’ll see how well I can execute it. I think if we just keep preaching “Made in USA” in general, we’re going to loose our audience. With the short attention span we have nowadays we have to find a way to reach people through entertainment which is why I initially chose to do the documentary. A lot of people don’t realize it, but we intended for the documentary to have a lot more humor in it, but as I traveled I realized it was no laughing matter. If I had to do it all over again I wouldn’t have produced this as a documentary, I would have broken it down and educated people scene by scene. Creating it as an education tool would’ve been more successful in my opinion. With that said, I’m proud of the producers and the crew of this project. We had a micro-budget and a short time frame to film, not an easy task, and we were still able to get national attention for this movement and our film.

AR: What are the top 3 things we can do as a country to better support the growth of American Manufacturing?

JM: 1. Stop thinking every purchase you make has to be American made. The reason I say that is because many people lose steam and lose sight of their goals because they get frustrated when they can’t do it all. Even a slight difference in your purchasing habits will make a difference in your local, regional, and national economy. Do what you can when you can.

2. Quit thinking your voice is not being heard in Washington. It may seem like there is no hope for our country, but when we have a nation of informed and active citizens we can make a difference. Call your representatives and let them know what matters to you. In this case, tell them you’re tired of watching manufacturing jobs being sent overseas.

3. Encourage your local shops to carry “Made in USA”. Many associate foreign made products with corporations like Walmart, Target, etc., but that’s not always the case. Tell you local shop owners you would like to see them carry more “Made in USA”. We celebrate “Shop Small Business” and “Buy Local”, and in my opinion, “Made in USA” goes hand in hand with that message. Speak up in a polite manner and have an honest conversation. Sometimes you’d be surprised what happens when you speak up.

AR: Last question, what future plans are in store for you? Any more documentaries? Last we spoke you were looking at maybe running for office, is that still in the works?

JM: I’m currently working on an awesome feature film project with a company out of Laguna Beach and we plan to film in Louisville, KY this fall, but I can’t say much more at the moment until the contracts get signed. I’m definitely excited about it though. I think sometimes you can try to hard and think to much about things. With a new little family, I have started thinking a lot more about the future and also what type of future my daughter (almost 8 months old) is going to have. I’ll be straight forward here, I don’t think you’ll see me in any political races for 2016, I simply have to much going on and I don’t think I’m in a position to make a run at the moment. However, leading up to 2020 I will research and explore two positions granted I’m still living in West Virginia. Those two positions would be U.S. House of Representatives and the governor’s race. I love my state and I feel I could lead our state in the right direction. Family always comes first though, so if I’m not in a position to do something like that, it’ll just have to wait.

Topics: American Manufacturing and Products, Made in America