In 2011, The Rodon Group hosted our first Manufacturing Day event.  We were one of about 200 companies throughout the country to open our doors to students, educators and parents.  Fast forward to 2015 and we were joined by over 2,300 companies and organizations, 120 in Pennsylvania alone.  The message is loud and clear; Manufacturing Day has struck a chord.

This event resonates with so many Americans because it focuses on developing the next generation of manufacturers and innovators.  Our nation, within the last century, owes most of our economic gains to the manufacturing sector, a sector that had been in decline for several decades.  Companies took production offshore to low-wage countries, eroding our manufacturing base.  In doing so, professional trade careers were no longer seen as a viable employment choice.  Factories closed their doors, and apprenticeship programs closed as well.  The training pipeline to acquire skills dried up.

Fast forward to today and manufacturing is making a comeback.  Technical schools are beginning to see renewed interest from students and parents. So, on Manufacturing Day, we set aside our morning event to focus on teachers and students.  This year our morning educational program was highlighted by two interns who shared their experience working at Rodon with the group.  We even had a student videographer who helped get all the action on film.

Our afternoon event highlighted local and national initiatives supporting American manufacturing.  Secretary Kathy Manderino of the PA Department of Labor and Industry spoke about the new Governor of Pennsylvania, Tom Wolf’s focus on the manufacturing sector.  Governor Wolf and Secretary Manderino introduced many of these new initiatives during the “Jobs that Pay” tour.  They unveiled the “Made in Pennsylvania Job Creation Program”, a tax incentive program for manufacturing companies that are creating stable middle-class job opportunities.  The administration is also working to increase funding for professional technical education programs and investment in workforce development.

"Today is National Manufacturing Day and worthy of a celebration, but in Pennylvania's economy, every day is manufacturing day", Secretary Manderino.

Sandy Montalbano, Communications Director for The Reshoring Initiative, talked about the gains in bringing factories and manufacturing employment closer to home.   Between reshoring and foreign direct investment, the growth in manufacturing jobs is estimated at 400%.  While the net numbers may not seem overwhelming in size, they show a positive trajectory.

The Reshoring Initiative tracks actual cases of reshoring and the industries impacted.  The industries creating the highest number of reshored manufacturing jobs include transportation equipment, electrical equipment, appliances and computer/electronic products.  Not surprisingly, most of these jobs (50%) have been restored from China. 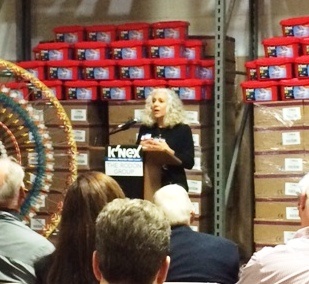 Foreign direct investment is a similar story. Most of the (FDI) has come from Germany.  Not surprising, given the move to produce German autos in America.  Interestingly, China ranks #2 in terms of FDI.  Again, much of this is driven by automakers.

Ms. Montalbano also reviewed the recent Walmart initiative to invest $250 billion in products that support American jobs over the next ten years.  To support this sourcing opportunity, The Reshoring Initiative created resources for Walmart suppliers to help them bring production back to the United States.  Through this effort, The Boston Group estimates 1 million jobs could be created over the next ten years.

According to the latest Reshoring Initiative Data Report, 22 companies have either reshored to Pennsylvania or are a result of FDI, creating over 1,000 jobs.

We are American strong

The Rodon Group has lived the reshoring saga, bringing back our K’NEX construction toy parts to the U.S.  In fact, we recently restored the production of Lincoln Logs as well.  We are proud of our commitment to American manufacturing and Manufacturing Day.  And, we look forward to helping the future makers and innovators in our country find fulfilling, well-paying careers.