Recruiting the Next Generation on Manufacturing Day

This article written by Mark Schmit and Zara Brunner at the Manufacturing Extension Partnership originally appeared on the NIST/MEP blog on July 9, 2015

Lebanon, Missouri’s population is a few hundred people over 14,000. To put that number in perspective, 1,120,000 people ride the commuter train on the average New York City weekday. In Lebanon, people welcome you with open arms, parents interact one-on-one with school teachers and real estate remains inexpensive. Lebanon represents every possible allure of small-town America. All that charm may have its perks, but what good is small-town appeal when you are an 80-year old manufacturing company with an inability to find new employees inhibiting your business’s growth? In some ways, that appeal has everything to do with it…you just have to show it off!

Like many manufacturers, DTE (Detroit Tool & Engineering) was and is seeking workers to fill open positions in its modern 230,000-square-foot manufacturing facility. DTE, as you might have guessed, is located in rural Lebanon, Missouri, and has been since 1933. The company builds tools and dies and custom automation systems, which are then shipped to customers in a variety of markets, including appliance, agriculture, automotive, medical, and consumer products.

DTE considers its people its most valuable asset. The company employs 109 people, many of whom have been there for more than 20 years. Like all manufacturers, the business relies on varied skill-sets to perform a wide range of functions. Career opportunities at DTE include project managers, controls and mechanical engineers, machinists and assemblers. DTE runs two shifts to keep up with demand and, these days, has a “help wanted” sign running 24/7.

DTE applied Manufacturing Day (MFG Day) resources to further its already glowing charm. Led by President Tom Waters, a Missouri Enterprise (the Manufacturing Extension Partnership Center in Missouri) board member, DTE uses MFG Day as a means to reach out to schools in one-on-one conversations and find the newest generation of DTE employees. What started as a way to be to be a “good corporate citizen” became an employee recruiting tool and a day to which everyone at DTE looks forward. 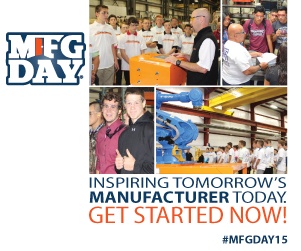 Chris Monzyk, then a student at Ozarks Technical College, toured DTE during the company’s first MFG Day tour in 2013. One of 30 students who visited the facility that day, Chris was at the top of his class and, along with a young woman who also took a MFG Day tour (she has since relocated to another city), was recruited by DTE. Chris proudly joined DTE as a machinist.

He went through internal training on how to use tools, read gauges, and effective organization techniques. Chris was also matched up with a mentor in order to help him learn the ropes and become successful. Chris’ mentor, Tim Huff, has enjoyed working with Chris, stating that, “Seeing Chris’ want-to-learn was very encouraging to me.” Chris emphasized the importance of a mentor, “Listen to the (experienced) guys and brush up on your math skills—it is really all about learning the tricks of the trade!” When asked why he is interested in machining, Chris stated,

“I like to work with my hands. It sounds cliché, but working at DTE is fun, exciting, and new every day. I get to make something from virtually nothing.”

Since its first MFG Day in 2013, DTE has tripled the number of local high school and two-year college students it reaches through open house tours. Last year, 90 students saw DTE’s operations in action.

Prior to walking the shop floor, all MFG DAY participants at DTE watch a video highlighting the NASCAR’s #22 Shell-Penske Ford Fusion Load-In for driver Joey Logano featuring MFG Day on its deck lid. DTE managers then address the group and describe what they do and why they enjoy working in manufacturing.

The stories get personal. The stories get even more personal when Chris takes center-stage and tells how his first MFG Day experience turned into a machining career. Chris’s story includes the pride he felt when first given his corporate nickname, “New Breed” (a perk that DTE bestows on every member of the organization), the financial freedom of no college debt, and the lifestyle flexibility that comes from earning a salary. When asked how New Breed felt about his first MFG Day, he exclaimed,

“I really learned a lot during the tour—I had no idea what to expect! Then I knew I wanted to be part of DTE.”

Joining Chris this year will be another student DTE is hiring who toured the company during last year’s MFG Day.

For MFG Day 2015, DTE plans on opening its doors to the community, hosting a student/teacher blog contest, having the local bakery make some MFG Day/DTE cookies, sending folks to a local school, and looking for its next new hires!

DTE is one of many companies that will join Missouri Enterprise in celebrating Manufacturing Day in Missouri, and there are thousands of manufacturers and related institutions participating across the country. Find out about events in your community.