In the weeks leading up to the start of the Rio games, the New Zealand sailing team, a strong contender for medals, had been hard at work training for a potentially race-costing scenario: a plastic bag, or other rubbish getting stuck to the boat. Guanabara Bay, where the sailing competitions will take place, is heavily and visibly polluted. Rio state officials have begun cleanup efforts that currently involve a single helicopter directing eleven rubbish collecting boats. However, they’ve also acknowledged that a real cleanup effort could take up to 20 years.

One of the major themes for the 2016 games is a celebration of nature, and sustainability. It’s a fitting theme given Brazil’s massive share of the Amazon Rainforest. The medals have all been produced with strict sustainability criteria. Gold is extracted without the use of mercury, silver and bronze medals contain 30 percent recycled materials, and half of the plastic in the medals’ ribbons are weaved from recycled plastic bottles. It’s a symbolic gesture, but what about actual sustainability efforts in Rio de Janeiro?

Rio’s ~10,000 tons of daily municipal waste is “officially” (an important distinction) handled by a company called Comlurb. Most of this waste ends up in landfills, or is dumped untreated into places such as Guanabara Bay. With the lens of the world on Rio, officials have opened new recycling centers. Comlurb technically has a system in place for recyclable waste. It involves individuals separating their waste from recyclable materials and placing latter into transparent plastic bags for pickup on particular days of the week. However, one estimate from 2015 places the total share of this operation at roughly 3.7% of the city’s total waste. In this recycling vacuum, a hodge podge collection of private individuals and for-profit companies have stitched together an “informal system” that handles the lion’s share of recycling in the city. 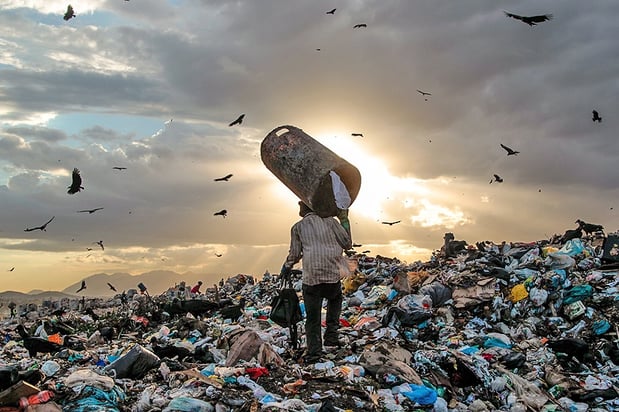 At the most grassroots level are the catadores. These individuals scour the streets, beaches, and landfills (before they were banned,) for recyclable materials. The materials are then sold to private buyers who ship it to other parts of the world for processing, or delivered to recycling cooperatives such as the Central de Triagem de Materiais Reciclaveis (CT) or the Material Recovery Center (MRC) at Caju. Opened in 1992, the MRC currently processes about 25 tons of recyclable materials a day. CT, a part of the “official” system, opened in 2014 with sponsorship from corporations such as Coca Cola. It can process up to 20 tons of sorted waste per day. Unfortunately, operations are below that capacity as of May 2015, due to Comlurb’s limited ability to deliver sorted waste.

While Rio de Janeiro’s recycling infrastructure is far from developed, there are signs for hope. The rising cost of natural resources means the profitability of recycling and an overall emphasis on sustainability is only going to increase over the years.

At The Rodon Group, we’ve long recognized our obligation to sustainability and the environment. We’ve designed our manufacturing process around it. Robotic packaging automation increases the carrying capacity of our cardboard boxes by over 5 fold. Excess plastic from molding is processed, recycled, and reintroduced into the manufacturing cycle. Even the colorant is manufactured at a facility only 2 miles away, significantly reducing the carbon footprint of material transportation. To further limit any potential safety hazards to individuals and the environment, we source many non-toxic materials and adhere to the stringent FDA, RoHS, REACH, and NSF guidelines.

You can get more in-depth figures about our sustainability efforts at http://www.rodongroup.com/about-us/sustainability