Sally Ride and the Women of NASA

Being the subject of a Google Doodle is noteworthy, but Dr. Sally Ride’s posthumous achievements are the true sign of a great pioneer.  She received her doctorate in Physics from Stanford and went on to become the youngest and first female U.S. Astronaut to go into space.

Sally Ride was only 61 years old when she passed away in 2012, however she left an enduring legacy. Early on, in her support of STEM education, Dr. Ride wrote several science books targeted to young readers. Her books included To Space and Back, Exploring Our Solar System and her autobiography Voyager:  An Adventure to the Edge of the Solar System. These publications were the catalyst for the development of a full complement of resources supporting STEM subjects.

Click on the photo to watch an interview with Dr. Ride on becoming an Astronaut 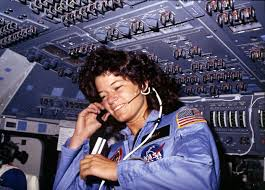 According to a 2013 press release “Sally Ride Science provides college and career readiness training and tools to build students' passion for STEM fields and careers…the company brings science to life for upper-elementary and middle school students, and offers professional development via the Sally Ride Science Academy, showing educators how to incorporate engaging career-focused approaches into their existing instruction. Additionally, Sally Ride Science administers Sally Ride EarthKAM, a unique NASA-funded educational outreach program enabling students, teachers, and the public to learn about Earth from the unique perspective of space.” These resources are the legacy of a true trailblazer.

Since Sally Ride’s 1983 first trip into space, many other women have followed.  Out of the 300 plus U.S. active, retired and deceased Astronauts, 47 are women and 40 have gone into space.  Peggy Whitson clocked the highest number of hours in space (over 9,000).  Both Shannon Lucid and Susan Helms have spent over 5,000 hours in space. Three female astronauts lost their lives in shuttle disasters. Judith Resnick, the first Jewish female Astronaut, was killed in the 1986 Challenger accident along with teacher and payload specialist Christa McAuliffe. In 2003, Space Shuttle Columbia broke apart upon re-entry to the Earth’s atmosphere. Kalpana Chawla and Laurel B. Clark both lost their lives in this tragedy.

Despite some setbacks at NASA, participation of women in the space program continues to improve. The latest 2013 class of 8 Astronaut candidates is comprised of 4 women and 4 men and we all hope this trend continues.

We talk a lot about the importance of STEM education.  There is no better way to honor Sally Ride and her fellow astronauts than to provide our daughters with the confidence and skills they need to pursue STEM careers in the future.  Our planet will be a better place for it.

For more information about NASA’s education programs and the company Sally Ride started, you can follow the links listed below.