Top 3 Predictions for the Future of Robotics

In a recent article from American Express Open Forum, our CEO and President Michael Araten spoke about what it’s like to hire a robot, in particular, Baxter, a collaborative robot from Rethink Robotics. We've had Baxter at our facility for almost 3 years and were one of the first plastic injection molding companies in the U.S. to use him. The article states “employing a mix of human and robotic employees could become a more mainstream staffing strategy among businesses in the near future.”Robots such as Baxter can also help companies save money and increase productivity. At Rodon, robotics and automation have given us a competitive edge, especially against overseas manufacturers. A robot such as Baxter can work 24/7, has no need for benefits or breaks and can be taught a task within minutes.

Robots have long been a source of fear and fascination, and Hollywood has always swung from one extreme to the other. Movies such as “I, Robot” portend a terrible future in which robots strip humans of their own free will, while “Chappie” praises robots as humanity’s final hope to avoid extinction. Robots in film have straddled the line between saviors and villains for years, leaving us to wonder what a world filled with robots would actually be like.

An Oxford University study predicts that 47% of US jobs could be automated within the next 20 years. As frightening as that sounds, robotic automation is happening — fast. An estimated $1.5 billion market for consumer and business robots will emerge by 2019, growing seven times faster than the market for manufacturing robots. Like it or not, robots will continue to play an increasingly important role in our daily lives.

Here are the top three predictions for the future of robotics:

The thought of fighting robots that are smarter than their creators has been the plotline of hundreds of movies depicting the downfall of the human race. Elon Musk previously added fuel to the fire by commenting that artificial intelligence (AI) is our “biggest existential threat” and even going on to compare AI research to conjuring demons.

These concerns have recently been echoed by other influential figures such as Stephen Hawking and Steve Wozniak, further raising questions about how much robots pose as a threat to humanity. Calls for regulation of AI have been so prevalent that in 2009 the Association for the Advancement of Artificial Intelligence (AAAI) held a conference dedicated entirely to whether robots could ever achieve alarming levels of freedom.

Mustafa Suleyman, the head of Applied AI at Google DeepMind, recently brushed aside the thought of rogue robots determined to end the human race while speaking at a machine learning event in London. Suleyman went on to stress that fear of AI needlessly directs attention away from its ability to solve some of the world’s biggest problems, such as global warming and food security.

Despite its potential to advance society, AI will continue to face scrutiny from those concerned about machines becoming smarter than their inventors. Expect the battle for regulation of AI to rage on for the next five years, and for government or industry standards to start appearing.

2. Designers Will Move Away from Humanoid Robots

As robots become a more common sight in homes and workplaces, humanoid aesthetics will be an important factor in the adoption of new robots. One major roadblock in the way of a seamless transition to a society filled with robots is the “uncanny valley,” a hypothesis that describes our revulsion toward things that appear and move like humans but are not quite human.

If humanoid robots are expected to serve more social functions that place them in regular contact with humans, more must be done to suppress the uncanny valley effect. In order to make humans more comfortable around robots and easier to interact with them, robotics engineers will seek to improve semi-humanoid developments that retain simple human traits as well as traditional machine forms.

A recent example in the push to eliminate robots that trigger the uncanny valley effect is Sawyer, a new robot from Rethink Robotics. The younger brother of Baxter, Sawyer is a repetitive-task cooperative robot and smaller, lighter, and more precise.

What makes both robots unique, however, are their motion-sensitive animated eyes. The lack of human features helps to prevent the uncanny valley effect from taking place, while the cartoon eyes promote collaboration with human workers. Together, Sawyer and Baxter have set the precedent for a future of semi-humanoid robots.

Drones have been a topic of much debate in recent months as concerns over safety, efficiency, and regulation have emerged. Despite this, consumers and businesses are continuing to use unmanned drones in a number of innovative ways.

Lifeguards in Los Angeles have sent up drones to keep swimmers safe during the summer months, while hospitals are investigating employing drones for medical applications, such as transporting defibrillators and medicine faster than ambulances ever could. Amazon has captured popular imagination by showing how it could use drones to deliver packages to customers’ doors — and the public has responded enthusiastically, although the Federal Aviation Administration (FAA) has been far more cautious to grant approval. 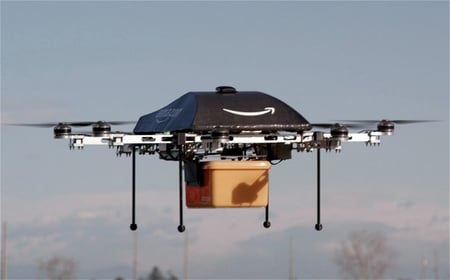 But the increasing use of drone technology is not without its controversies. An 18-year-old man from Connecticut made headlines in late July for attaching a handgun to a consumer-grade drone, flying it through a wooded area, and firing the gun remotely. He was arrested after authorities discovered uploaded video footage of his device on YouTube, and this has sparked a national debate on the legality of such devices. While local officials claim the drone is not illegal, regulators at the FAA argue they have rules in place that strictly prohibit weapons from being installed onto civilian aircraft. Such rules, however, have not stopped consumers from experimenting with weaponization.

Where Do We Go from Here?

So what does all of this mean for the safety of our civilization? The real threat to humanity lies not in the rise of the robots but in our own tendency to use new scientific insights in ways that violate the well-being of others. Computer-based flight systems can quickly turn into extrajudicial drone strikes. Vast communication systems can mutate into a surveillance society in which every motion and message is tracked by agencies exempt from constitutional limits. These fears about technology actually disguise the fears we have about how such discoveries will be used by us.