The U.S. Manufacturing Workforce & Making it In America

This article written by Adam Robinson, Marketing Manager at Cerasis, originally appeared on the Cerasis blog on March 6, 2015

While US manufacturing has been hit hard by nearly two decades of policy failures that have damaged its international competitiveness, it remains a vital part of the U.S. economy.

The US manufacturing sector employed 12 million workers in 2013, or about 8.8 percent of total US employment. Manufacturing employs a higher share of workers without a college degree than the economy overall. On average, non-college-educated workers in manufacturing made 10.9 percent more than similar workers in the rest of the economy in 2012–2013.
The report you can fully access here, examines the role manufacturing plays in employment at the national, state, and congressional district levels, including the number of jobs manufacturing supports, the wages those jobs pay, and manufacturing’s contribution to GDP. (This report updates an earlier EPI report but includes U.S. congressional district data for the first time.) The data shows that U.S. manufacturing employment was stable for three decades until 1998, and has been on a largely downward trajectory since then, with traditional manufacturing states hit particularly hard. Given its size and importance, we cannot ignore the consequences of such a decline. Further, the policies that would help manufacturing the most are those that would help close the nation’s large trade deficit. Reducing this trade deficit would, in turn, provide a valuable macroeconomic boost to a U.S. economy that is still operating far below potential. 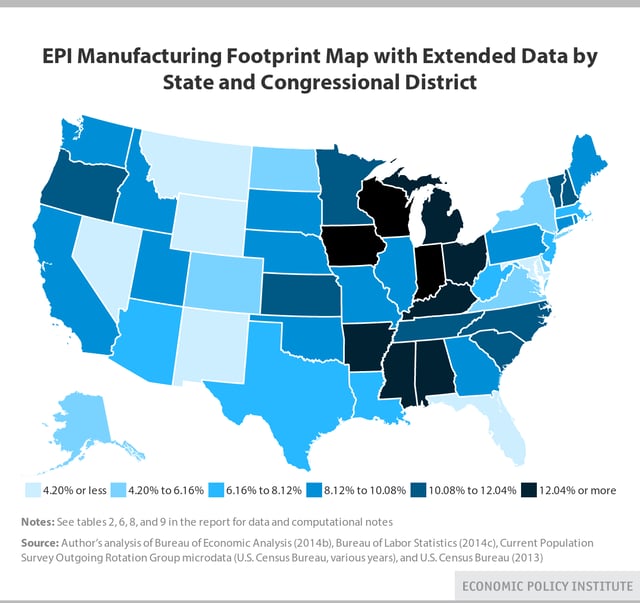 Manufacturing industries generated $2.1 trillion in GDP (12.5 percent of total U.S. gross domestic product) in 2013. But even these figures do not fully capture manufacturing’s role in the economy. Manufacturing provides a significant source of demand for goods and services in other sectors of the economy, and these sales to other industries are not captured in measures of manufacturing sector GDP but are counted in the broader measure of its gross output. U.S. manufacturing had gross output of $5.9 trillion in 2013, more than one-third (35.4 percent) of U.S. GDP in 2013. Manufacturing is by far the most important sector of the U.S. economy in terms of total output and employment. The manufacturing sector supported approximately 17.1 million indirect jobs in the United States, in addition to the 12.0 million persons directly employed in manufacturing, for a total of 29.1 million jobs directly and indirectly supported, more than one-fifth (21.3 percent) of total U.S. employment in 2013.

The United States lost 5.7 million manufacturing jobs between March 1998 and 2013. The principal causes of manufacturing job losses were growing trade deficits, especially with China, Mexico, and other low-wage nations, and the weak recovery from the Great Recession since 2009.

In 2013, the U.S. manufacturing sector directly employed 12 million workers, or about 8.8 percent of total U.S. employment.

INFOGRAPHIC: Making it In America

Topics: Manufacturing, Infographics, Made in America