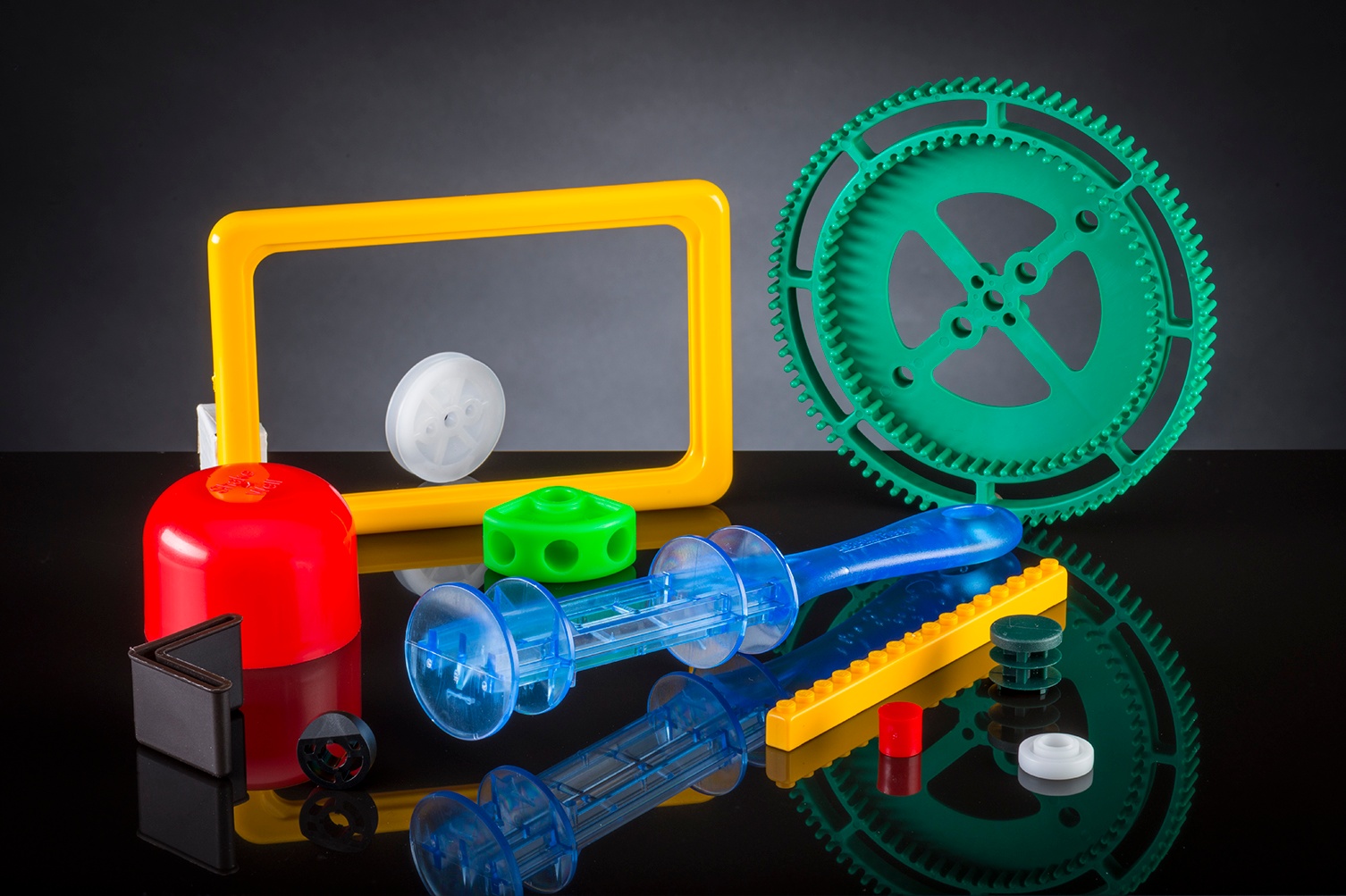 With hundreds of commodity and engineering resins available on the market today, the material selection process for plastic injection molding jobs can often seem daunting at first.

At The Rodon Group, we understand the unique benefits and properties of different types of plastics and work closely with clients to find the best fit for their project.


What Are Plastic Resins?

We live in a world surrounded by plastic resins. Due to their several desirable properties, plastic resins can be found in everything from bottles and containers to automotive and medical components and much more. Plastic resins include a large family of materials that each have their own unique properties that make them ideal for different applications. When choosing the right resin for your project, it’s important to understand what each type has to offer.

What Is the Difference Between Resin and Plastic?

Resin and plastic are both important compounds

but feature some key differences, including:

Injection-molded ABS is used in a wide variety of applications, including plastic wall plates for electrical outlets, protective headgear, keyboard keys, electronic components, and automotive components such as auto body parts, wheel covers, and dashboards. It is also used for a range of industrial fittings, sports equipment, and consumer goods.

Because of its low coefficient of friction, injection-molded Celson® is ideal for pulley wheels, conveyor belts, gears, and bearings. This material can also be found in various high-performance engineering components, lock systems, firearms, eyeglass frames, and fasteners.

Injection-molding polypropylene is used in a wide variety of industrial, commercial, and consumer applications. For example, it can be found in power tool bodies, appliances, packaging components, sporting goods, storage containers, and children’s toys.

Because HIPS features a higher impact strength, it can be found in appliances, printing equipment, signage, and equipment components. Other common applications include children's toys and electrical components.

Due to its flexibility and resistance to moisture and chemicals, injection-molded LDPE is often used for applications including medical device components, wire and cable insulators, toolboxes, and children’s toys.

How Are Plastic Resins Made?

Manufacturers create plastic resins through the “cracking process,” which involves heating hydrocarbons to break down the larger molecules into propylene, ethylene, or other types of hydrocarbons. These monomers then undergo polymerization reactions to create polymer resins, which can then be collected for further processing, such as the addition of plasticizers, flame-retardant chemicals, dyes, and more.

After the cracking process, the compounds are formed into polymers, which can be combined to make the ideal plastic resin featuring the characteristics needed for the intended application. Once the desired resin is formed, it can be used in the injection molding process to create the desired products.

An Introduction to Injection Molds

Injection molding is a highly versatile manufacturing process. It is used to create components in a range of shapes and sizes for various industries and applications. A key element of the process is injection molds.

Injection molding is a manufacturing process used to create a wide range of plastic parts and products. There are many factors to consider when planning an injection molding project, including who will provide the service. One of the first things you should determine is volume since it helps narrow down which companies have the necessary resources to accommodate your project.

How to Select the Best Resin for Your Plastic Injection Part

Plastic injection molding is a highly versatile and efficient process that allows manufacturers to create a wide range of products and components from melted plastic resins. As a result of advances in molding technologies and material development, polymers and plastics have been incorporated into an increasingly wide array of products and applications. Featuring lightweight strength, aesthetic appeal, and durability, plastics are becoming the preferred material for industries ranging from consumer products to medical devices. 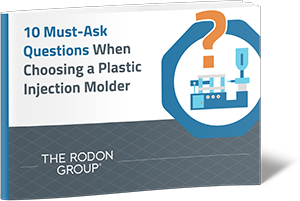 Advancements in plastic injection molding technology allow manufacturers greater flexibility and sophistication in part design. At The Rodon Group, we are continually incorporating the newest technologies to remain on the cutting-edge of molding techniques in all sectors. This commitment to growth and innovation has allowed us to continue providing the highest-quality products to our customers.

7 Answers to the Most Frequently Asked Questions About Injection Molding

Plastic injection molding is an extremely versatile method of producing plastic parts and has multiple advantages over other methods of plastic molding. Not only is the process simpler and more reliable than others methods, but it is also extremely efficient. Both of these are primary reasons why it has become a standard process in virtually every industry demanding high-volume components and parts.

After 62 plus years of experience in the industry, we have heard virtually every question a customer could ask. To help you make an informed decision on your plastic injection molding project, we’ve outlined some of the most common questions – and their answers from our previous blog articles– below. 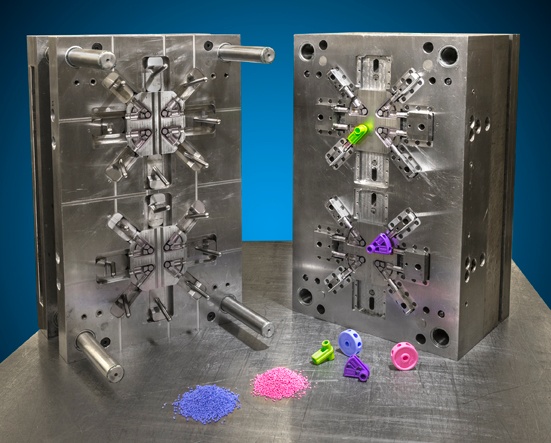 Plastic Injection Molding 101 - Determining the Cost of a Mold 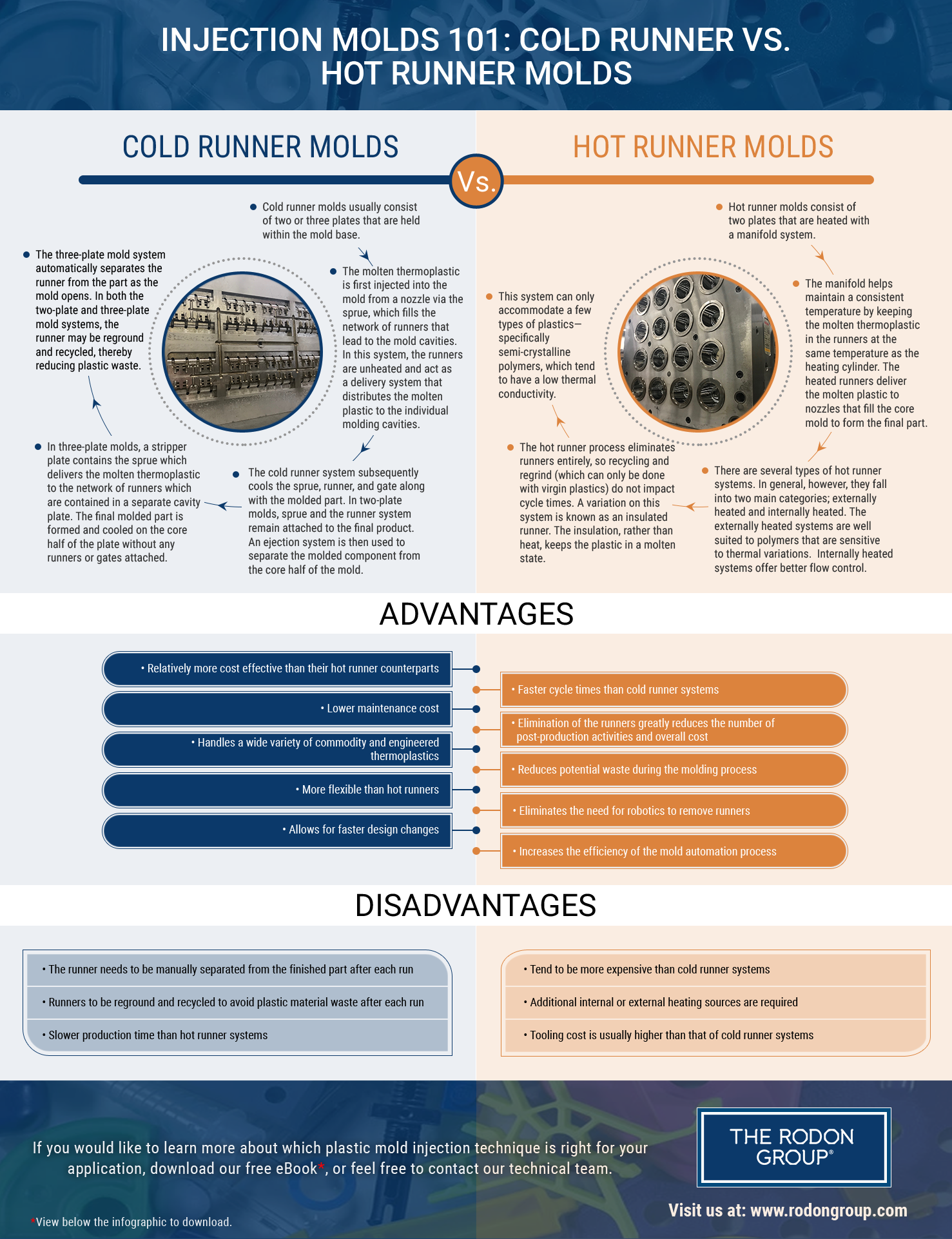 Ever since its introduction in the late 19th century, plastic injection molding has revolutionized the way we create plastic products. Although the technology has evolved significantly over the years, many injection molds today still fall into two main categories: hot runner and cold runner systems. Each of these systems has their own benefits and limitations which make them better suited for specific applications.

Understanding the differences between these technologies can help you have a more productive and informed discussion with your plastic injection specialist to determine the most feasible option for your unique application. 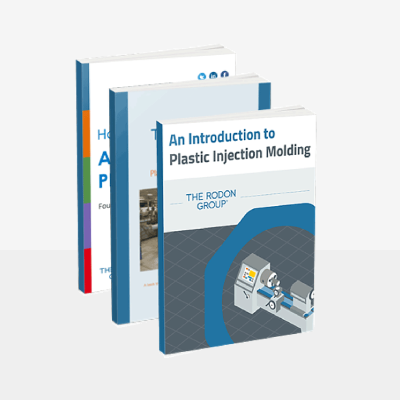