The last week in July was a hot one for the Philadelphia region, but it didn’t wilt the spirits of the employees at The Rodon Group and K'NEX as they hosted Secretary Hillary Clinton and Tim Kaine’s first campaign stop after the Democratic National Convention. Regardless of your party affiliation, this was a proud moment for our company, to be chosen to host this historic event, the first leg of a Presidential race never before seen in our country.

Rodon has been on a list of many firsts that we are proud of. We were one of the first members of the “American Made Matters” movement, a group of companies committed to keeping jobs in the United States. We celebrated the American workforce, by becoming one of the first manufacturing companies to participate in Manufacturing Day, a countrywide event highlighting the impact manufacturing has on stable, middle-class jobs. And, we were a key partner in establishing a local manufacturing alliance to encourage young people to pursue careers in STEM education and skilled manufacturing careers. 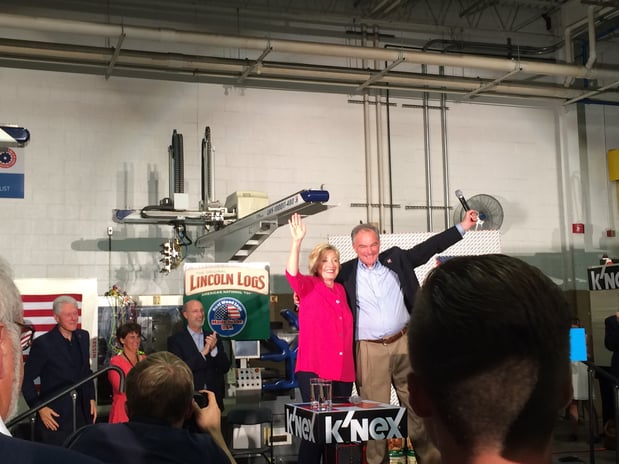 Not so long ago, The Rodon Group made news when we welcomed President Obama as he toured factories throughout the country.  On Friday, July 29th, we were honored to host many key policy makers from Pennsylvania. The event began with a speech from Governor Tom Wolf, who visited Rodon before his winning the election last year. He joked that the crowd this Friday was a bit bigger (by a hundred people or more) than his first visit. United States Senator Bob Casey then came on stage and introduced Tim Kaine, the Vice Presidential Candidate for the Democratic Party.

This event marked the start of a campaign priority to promote American manufacturing jobs. The Democratic jobs plan includes investing in regions with manufacturing prowess and making America the world leader in clean-energy technologies.

The Vice Presidential candidate Tim Kaine has deep roots in manufacturing.  As he explained on his visit, “This brings back memories coming here and seeing some machinery that is familiar to me and then some machinery that is not so familiar.  I grew up in a household where my dad ran a business called Iron Crafters Inc. in the stockyards of Kansas City.  And it was an ironworking and welding shop.”

Senator Kaine continued, “The first room we walked into, a lot of presses, punches, lathes looked exactly like the ones that I grew up working on, with his five or six employees and my two brothers and me and my mom basically all making that business work.  That’s what small businesses do. So you will hear people say when it comes to manufacturing in America manufacturing is dead, but that is not the case.  And it’s often these family businesses, just like Rodon K’NEX, that are keeping it alive and are revitalizing it and bringing a renaissance so that we can do it in the 21st Century.  And so we honor that in you, and that’s why we wanted to come by on our first road stop on a two-day bus tour in Pennsylvania and Ohio to talk about jobs.”

Kaine then introduced the candidate for President of the United States, former Secretary of State, Hillary Clinton.  It turns out the former Secretary has some deep roots in Pennsylvania.  Her father’s family is from Scranton and her father along with her brother both attended and played football at Penn State.  She acknowledged the importance of a healthy American manufacturing sector to our economy.  “We are the best-placed country in the world to seize the future.  But that doesn’t happen by wishing for it.  It happens by building for it, something that you here at K’NEX know a lot about. That’s why we’re on a jobs tour.  We want to tell you what we will do if we’re so fortunate enough to be the President and Vice President.  We know that companies like this one provide some very important lessons.  You have to have a well-trained workforce.” 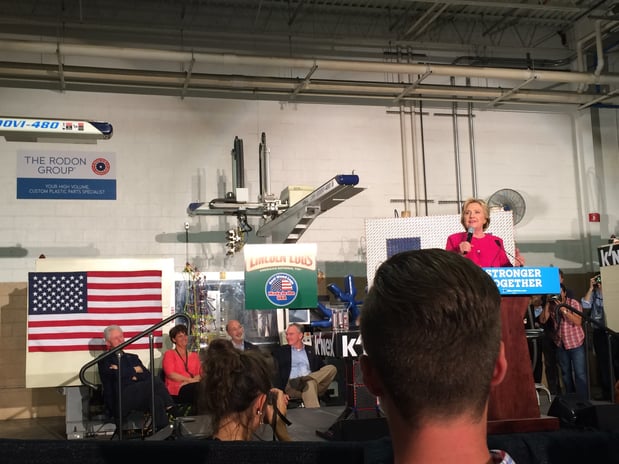 The former Secretary went on to say,”STEM and STEAM skills are important for the combination of design and production.  We know that if we’re smart about it, we can bring jobs back from China and other places if we make up our minds to do that, just like that’s happened here.  Rodon and K’NEX see employees as assets to be invested in and treated with respect. So that’s why I’ve laid out throughout this campaign very specific plans about how we’re going to get the economy growing again… creating more good jobs, and helping people acquire the skills to fill the more than one million jobs that are available in America today, that are open, that are not being filled.”

The presidential candidate ended by saying, “I’m just so happy to be here in a company with such a great history, such great values, such a great success, bring jobs back from China and then exporting around the world.  That’s what we have to do. Nobody can outcompete America when we put our mind to it.”