On August 14th, Walmart executives joined with state officials to help connect U.S. manufacturers and suppliers with buyers and government resources.  This summit is just one facet of Walmart’s strategic plan to increase U.S. made products in their stores by $250 billion dollars over the next ten years.  The Boston Consulting Group estimates this commitment will create 1 million jobs.

In July, Walmart invited more than 500 manufacturers and entrepreneurs to their headquarters in Bentonville, Arkansas for an “Open Call” event.  Visiting businesses had the opportunity to meet with Walmart buyers and pitch their products.  Several  participants walked away with a sale to Walmart stores. 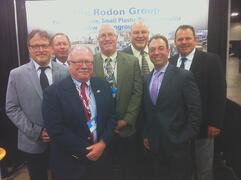 During the August U.S. Manufacturing Summit, President and CEO of K'NEX Brands and The Rodon Group, Michael Araten, was joined by fellow manufacturing President and CEO of Weber Grills, Jim Stephens for a conversation on what it takes to manufacturer in America and do business with Walmart. Michael Araten describes our company’s commitment to making K’NEX construction toys in the U.S. as “Patriotic Capitalism.”  “It started in the depths of the great depression. We wanted to keep jobs here.  The only way to save our people was to re-shore manufacturing” stated Araten. “We hoped and believed people would care where products are made. There is no bigger, no better brand than Made in America.”

With Walmart’s continued commitment to support American Manufacturers and what they produce, consumers will be able to find and buy products made here that create jobs here.  During a recent interview with PlasticsToday.com, Araten was asked if he believed Walmart was sincere about their commitment. “Walmart is very sincere about their desire to meet the demand for goods made in the USA. They have determined that consumers are looking for and prefer products that are made in America. They made many public comments at the Summit that they would work with suppliers to help them handle both the scale and price points needed so that Walmart can meet its mission of saving money and living better."

Walmart’s investment and involvement have positively impacted several US companies.  Here are a few that were cited by a former executive as true success stories.

With the change in Walmart leadership and the continued commitment to finding ways to help manufacturers build better and cheaper products, some of the original skepticism regarding Walmart’s commitment is waning. Even the most skeptical would probably agree today that Walmart’s intentions seem honorable.  So, the next time you are shopping in Walmart pay attention to the labels.  You will have more opportunities to buy American-made products.